How has the Biden administration already made things better for transgender people? 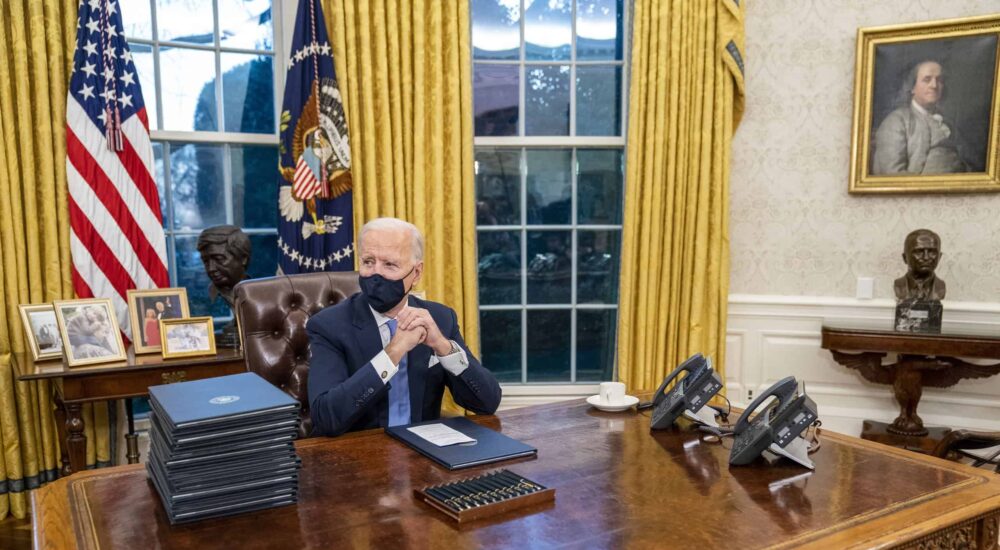 During his first 100 days in office, President Joe Biden has vowed to make the enactment of the Equality Act a legislative priority, as well as direct his Cabinet to ensure immediate and full enforcement across all federal departments and agencies. Since his inauguration six weeks ago, Biden has signed a string of executive orders which immediately actioned the reversal of oppressive policies put in place by the Trump-Pence Administration. In a short space of time, Biden has shown that it’s possible to make rapid progress towards true equality and inclusion, setting a hopeful precedent for the remainder of his presidency.

Among the first of his decisions was to include more pronoun options in the White House contact form – to some, a minor change, but a significant leap for the LGBT+ community, and a signal of intent for the months that will follow. During the same sitting, Biden signed an executive order to prohibit discrimination based on sexual orientation and gender identity, under the Fair Housing Act. One in five transgender people have been discriminated against when seeking a home, with those who are seeking support from homeless shelters often turned away when facilities are not gender neutral.

In April 2019, Donald Trump banned transgender people from joining the US military. At the time, an estimated 15,500 transgender individuals were on active duty or serving in the guard or reserve forces, but no new recruits were allowed to join. Within days of his inauguration, Biden’s administration confirmed that transgender service members will no longer be subject to the possibility of discharge or separation on the basis of gender identity. This revoked the previous administration’s decision and is a much-needed, overdue step in the right direction.

As the first openly transgender federal official set to be confirmed by the US Senate, Biden’s nominee for Assistant Health Secretary, Dr Rachel Levine, is making historic strides for the transgender community. If confirmed, her position will be an affirmation of an identity that has historically been marginalized, as well as a signal of intent for the federal government to provide specific attention to the health of vulnerable communities.

From her own lived experiences, Levine brings a highly valuable perspective to the table – one which will influence major decisions at federal level – as well as strong leadership which is influenced by her own intrinsic understanding of the specific challenges faced by the transgender community at every level. Using her position of power as a platform, Levine will continue to advocate for and amplify the voices of underrepresented individuals, all the while demonstrating that reaching a position of such seniority really is possible, even in the face of countless barriers along the way.

How can businesses learn from this administration?

Diversifying boardrooms and leadership teams begins by embracing the power of diverse thinking. Cognitive diversity can enhance team innovation by up to 20 per cent, making it an essential part of any thriving team, and welcomes a wealth of varying views, opinions and perspectives into day-to-day decision-making within organisations. Despite this playing such a vital role at board level, there are still just four openly out LGBT+ CEOs of Fortune 500 companies.

If they are to benefit from diversity of thought, organisations must not only have diverse candidate slates, but ensure that visible role models are positioned throughout the company, challenging the current leadership landscape and allowing other employees to realise that they have the potential to achieve their career ambitions. We’ve spent the last 10 years levelling the playing field for leadership teams, and although we’ve witnessed significant change, there’s still a long way to go before true equality is achieved.

Inclusion strategies should be cemented in place from the outset, making sure everyone has a fair opportunity to access a role and the means necessary to flourish within it. Businesses must set diversity targets for every position, hold recruiters accountable for presenting diverse shortlists and investigate the specific barriers that are currently presenting challenges for diverse candidates. If we are to see diverse talent rise to the very top, we must elevate underrepresented voices at every level of the business, engage in open conversation about the progress that must be made and admit our past mistakes or misunderstandings.

Biden’s administration has made a strong start on the path to inclusion and businesses should take note of Biden’s swift actions in cementing their own inclusion goals. Diversity and inclusion strategies should be long-term, sustainable plans of action, but armed with the right knowledge, support and willingness to change, they can, and should, be implemented without delay.