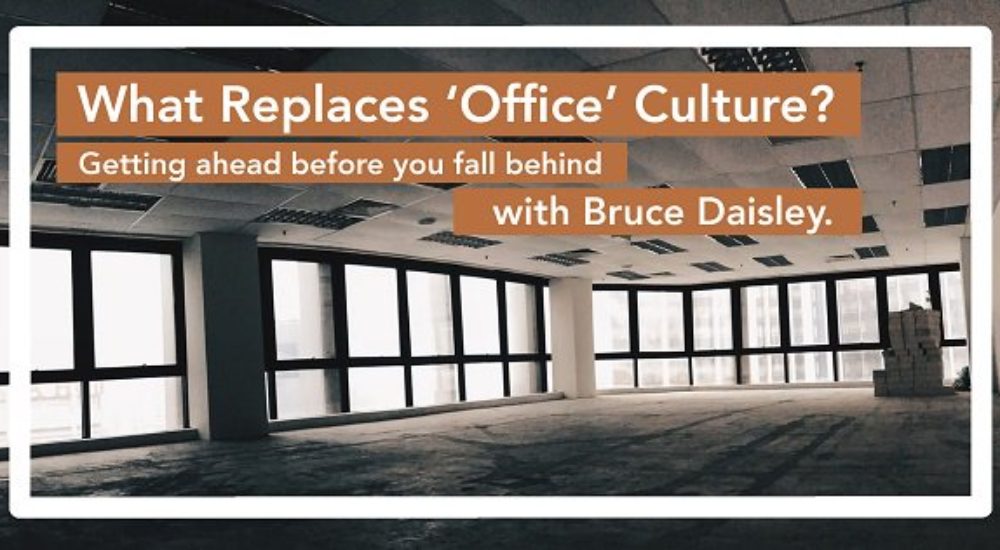 Eight months ago, our workplaces were thrown into complete disarray. A majority of us packed up our usual desks in the office and had to relocate to our own homes, resulting in vastly different experiences for each and every employee. Our understanding of the workplace – the office environment as we know it – has shifted completely, but will it ever be the same as it once was?

We were recently joined by Bruce Daisley, a Sunday Times bestselling author and one of the most respected thought leaders on the subject of workplace culture. In his #1 Apple Charts podcast, Eat Sleep Work Repeat, Bruce interviews world-class psychologists, neuroscientists and workplace experts to better understand how we can improve the way in which we work.

During our discussion, we asked Bruce to share some of his thoughts on the future of the workplace, as well as how employers can shape their own organisations to ensure that they are building a happy, productive and inclusive workplace culture.

Evidently, some businesses have shown determination to recreate and rebuild the past, but having experienced a taste of the way that our workplaces could operate differently, more agile organisations are harnessing the opportunity to trial something a little more daring than they’ve ever done before.

‘Originally, we entered this situation finding it quite energising,’ Bruce reflects. ‘With the sense of peril that we all had, it was this very strange experience. As time’s gone on, it’s become quite monotonous and the difficulties of this have grown’. More importantly, ‘the lived experience of this is very different for everyone – it’s very unevenly distributed.’

He reports that most Chief Executives recognise that something has changed, with two-thirds of them claiming that they will have a smaller office footprint in the future. There’s definitely a trend here, but whether it will be a successful one will vary so vastly between both organisations and individual employees.

Cultivating a sense of human connection

Technologically, we’ve all become better connected than ever before over the past few months, but the pandemic has prevented us all from connecting with others in the ways that we’re used to. Despite our increased reliance on frequent video calls, emails and instant messaging, a lack of face-to-face conversation has left many teams feeling disconnected, and, in some cases, isolated from their own organisations.

‘The tragedy of all of this is that the unfortunate consequence doesn’t distribute fairly’ says Bruce. The office is typically an environment that unites individuals from different backgrounds, all under one roof. But without it, will some of us struggle to make genuine, human connection with our peers? It’s a tough barrier to overcome, and a lack of face-to-face conversation can have a direct impact on our performance at work too.

Bruce refers to to research from the Massachusetts Institute of Technology, where Professor Alex Pentland studied the intersection of psychology and big data. According to the study, the ‘secret superpower’ of the office is face-to-face conversation, which accounts for about 37 per cent of our creativity and innovation. For comparison, formal meetings account for just three per cent of this. The results revealed that it’s actually the informal debriefs that take place after the meeting that spark the most innovative ideas – conversations that many junior team members are not even aware of.

While working remotely, this is only amplified. Of course, in more junior roles, there is a certain degree of intentional learning and personal development – but there’s also a lot of passive learning that typically happens in an office environment too, simply by overhearing discussions in the office or observing a more senior colleague execute a difficult task.

This is a particularly challenging hurdle to overcome, both for the employee and their employer. As organisations begin to set out their plans for next six months, Bruce offered a simple piece of advice: ‘It’s a really critical thing for all of us, as we move forwards, to think about how our inclusiveness can extend to everyone. If we’re starting to think of a plan for spring – what can our organisations do to make up for that last year? How can we bring people on and develop people?’

Acknowledging inequalities across the board

Bruce noted that in some companies, those in executive positions have reported that their connections with their peers have improved. Having seen each other in loungewear, being interrupted every so often by their children or pets, many of the barriers between our personal and professional lives have now been broken down. However, this newfound sense of connection wasn’t necessarily seen by their colleagues in less senior roles.

‘One of the fundamental things about great workplace culture is the secret sauce of psychological safety – a really interesting concept coined by a researcher 20 years ago, but really made famous by Amy Edmondson, a Harvard researcher. It’s our ability to speak candidly to one another, without fear of judgement. Quite often, for fear of appearing ignorant, we don’t ask questions; for fear of appearing obstructive, we don’t raise concerns.

‘Psychological safety has very strong corelative evidence behind it,’ Bruce remarks, drawing on a particular study conducted by Google’s People Analytics Team. Essentially, they wanted to find out what characterised their most talented employees. The team discovered that their best overall performance was team-based, rather than the work of individuals. The highest performing teams would often cluster together, as there was a strong sense of psychological safety within their teams.

In larger groups, the same sense of trust and security isn’t present, and there’s a heightened sense of critical judgement. Bruce was keen to emphasise this, reminding us that although establishing psychological safety within small teams can be incredibly effective, ‘a leadership environment that fosters this seems to create the best performance – but it doesn’t scale’.

Evolving alongside the office environment

In 2021, it looks as though many companies will be experimenting with hybrid working, perhaps setting some base ‘rules’ and allowing their employees a certain degree of autonomy to determine which style of working is best for them in the long-term. Naturally, this will vary between different departments within each company, and quite vastly so between different organisations.

According to Bruce, the office has four key functions:

‘The one thing that characterises these functions is that the office had a network effect – you knew who would be there and you could tick off the people you needed to see by a five-minute stroll around the workplace,’ he expands. When teams work remotely, they lose the network effect entirely.

Nevertheless, un-tethering employees and enabling them to work wherever they prefer has been extremely successful for companies like Base Camp and Auttomatic. Having previously spent 11 months working together in the office, with one month away from each other while on vacation, Auttomatic (who own WordPress) decided to invert this model entirely.

Now, they permit employees to spend 11 months working remotely, but come together as a team for a total of one month per year. This takes the form of compulsory, high-energy events focused on team cohesion, for one week per quarter. These focused, intentional gatherings provide a real boost to morale and employee engagement.

As many of us are now spending increasingly longer hours sitting at our desks, kitchen tables or on our sofas, we’re at a far higher risk of experiencing burnout. Bruce references a quote from writer Anne Helen Peterson, who encapsulated burnout in just a few words: ‘any time we treat our energy as infinite, that’s when burnout results’.

From continually checking our emails on our mobile phones, to swapping the time we used to spend commuting for extra hours in front of our computers, we’re often unknowingly raising the stakes and sacrificing our own wellbeing. A combination of this, alongside the loneliness of working from home, can be a recipe for disaster.

‘That sense of disconnection, combined with a sense of being overwhelmed, is a really dangerous combination,’ Bruce tells us. ‘It’s why, for all the euphoria that people may have about remote working, it’s really critical that we shouldn’t necessarily look at what the majority in each statistic looks like. If 85 per cent of people are really thrilled about this, then what’s happening in the 15 per cent?’

We must consider the stories behind these minorities and acknowledge that each demographic has been affected differently by working remotely. On the whole, employee engagement has risen most dramatically among older employees – perhaps because those who are younger are living with young families or in shared housing, where they are more prone to disruption.

Setting up for future success

With experiences varying so vastly among employees, it’s not always easy for employers to ensure they are being inclusive. Bruce encourages employers to ‘lead with empathy, understanding and to think about the opportunity in the transformation that we’ve seen and make sure we can bring the benefits evenly.’

Click below to watch this interview in it’s entirety.