‘We should never be apologizing for asking for what we deserve’: Progressing women in business with Anja Skvortsova 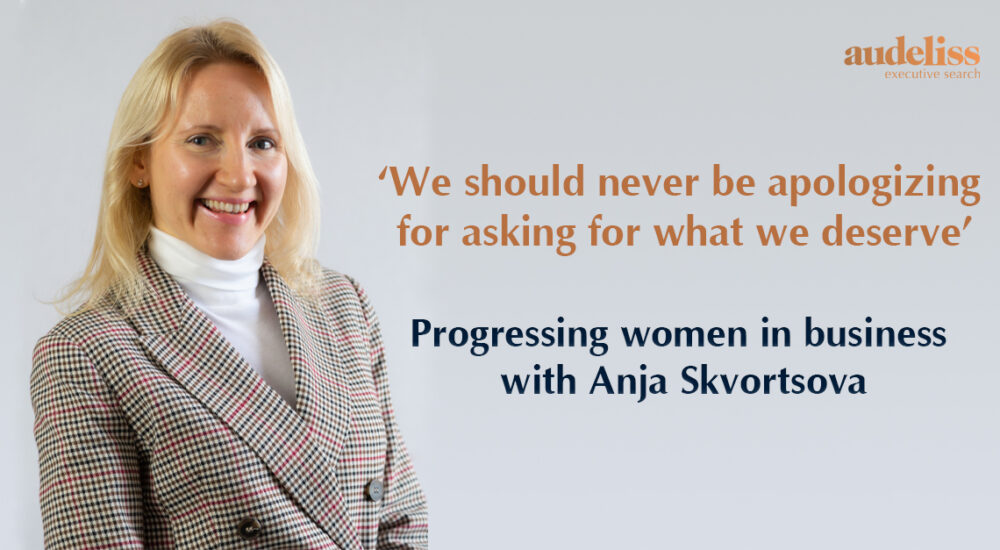 As a specialist in executive search and an active voice for women in business, Anja Skvortsova, Audeliss’ Managing Director, has grown valuable insight on what women need to become leaders in business. We spoke to Anja about what approaches advocates should take to help eradicate the barriers women face when coming up for promotion, and what women can do to ensure they are ready for senior leadership roles.

The efforts to increase gender parity in the workplace began with initiatives for women’s inclusion in the 1980s and 1990s. Progress was incredibly slow and as little as 15 years ago, figures in the U.S. showed that only 16.4% of executive seats were filled by women.

Despite initiatives from the UK government for FTSE-companies to increase their Board and Leadership gender representation to a minimum of 40% by 2025, and new Board Diversity Rules requirements by Nasdaq that any new company looking to list are required to have at least one female director, women are still behind in leadership representation.

In fact, according to McKinsey and LeanIn.Org’s Women in the Workplace 2022 report, women leaders are switching jobs at record rates, citing microaggressions, unrecognized work in DEI, and difficulty in progressing into senior-level roles as one of the main reasons for them leaving. For every 100 men who get promoted, only 87 women, and 82 women of color, progress. As Anja reflects, ‘As much as people like to think that the discussion around women parity in business has moved on and is progressing, most of the numbers are pretty terrible still’.

To explore this, we asked Anja what can be done to accelerate women’s progression in business. In addition to being Audeliss’ Managing Director, Anja also works with the Women Business Collaborative as their Europe Advisory Board Co-Chair, where she discusses the importance of supporting women in business with large corporations and their women leaders. ‘I grew up in Western Siberia during the communist days in Russia and I was surrounded by an incredibly strong bunch of women who all worked and were very successful in their roles, therefore, I never perceived women to be a weaker sex’, Anja reflects, ‘I thought women could achieve anything, so it’s important for me to create that dialogue with other women and advocates.’

When looking at what companies should do to enable women to reach executive positions, Anja talks about how organizations should have in place actions that encourage women to become CEOs. One of those is building a pipeline where roles mostly dominated by women, such as CHROs and CMOs, have a natural progression to CEO level. ‘I don’t think common female leadership qualities are as valued in business as the male leadership qualities’, Anja comments, ‘I would like to see that there is more appreciation for female leadership, and actually what it means to be a woman leader.’ At the moment, organizations still highly prize roles such as CFOs and COOs to be the next in line to lead a company, and those roles tend to be dominated by men.

Organizations should also consider how they would be supporting a woman CEO when they get to that stage. ‘There is a lot of scrutiny, especially around public CEOs who are women, and I think a lot of women see that and it puts them off reaching for the top jobs.’ It’s essential that the company and its Board are there to support and encourage their women leaders so they can perform on a level playing field, and without additional pressure and distraction.

The last point that Anja makes is that organizations should be putting women forward at all levels to take ownership of their work and team. Recalling when she first started in recruiting, Anja explains that her ability to confidently lead came from those early experiences, ‘You were very much encouraged to almost own and run your own desk in a quite entrepreneurial way. And I really liked that ownership […] In my early 20s I would be pitching and dealing with very senior clients from many different sectors, having to quickly adapt to each search, and I was also managing a team that was generating around £1 million in revenue.’

When discussing what women can be doing to progress to C-Suite or Board roles in the future, Anja greatly encourages seeking out sponsorship. Sponsorship goes beyond mentorship, where people who are in positions of power can give employees the leg up in the executive career ladder. ‘I think it’s obvious that, especially in a corporate career, you cannot succeed on your own. So you have to have people within the company and your network who can be your sponsors. I would very much encourage women from early on in their career to use counsel.’

Anja also encourages women to embrace their lived experiences. Anja reflects on how her own experience of growing up surrounded by strong women and her journey moving from Russia to the UK helped her in the work she does today, ‘Coming from an immigrant background, you don’t have an expectation that you are going to be given anything in life. At Audeliss, my lived experiences give me purpose for the work that I do; I feel that we aren’t just appointing somebody into a role; we are genuinely making a difference to somebody’s life. Many women and immigrants have such rich experiences in their lives, from having to adapt to a new environment to overcoming biases, that they would make really strong and empathetic leaders.’

For women interested in joining Boards, we explored in a previous article how changes in Board trends are opening opportunities for diverse directors (), and how lived experiences are what forward-thinking organizations are looking for when appointing new directors to Boards.

Anja ultimately advises women to be more unapologetic and lean in to their ambitions. Reflecting on her past experiences when she was progressing in business, she recalls, ‘I have been told a number of times by predominantly male bosses over the years, that, “You might be too ambitious” or “You might be too direct” and I’m sure they’ve never told any of my male colleagues this. And so I’ve always had this unapologetic attitude because I think we should never be apologizing for asking for what we deserve.’